EAGLE RIVER, Wis. -- By the time the ice chips settled on Dollar Lake on Sunday afternoon, 16 teams were crowned champions of the 2017 Labatt Blue/USA Hockey Pond Hockey National Championships. Many of those teams were experiencing in the thrill of victory for the first time.

Among them were a pair of women's teams that skated away with adult hockey's version of the Stanley Cup and bragging rights that will extend into next year.

"They say you should act like you've been here before, but we haven't been here before so we're kind of going crazy," said one  member of Four Loco, the champions of the Women's Silver division.

The team from Milwaukee, consists of six players ranging in age from 26-29, are veterans of this event.

"For us to come up here every year and get to spend a weekend together and be around everyone who loves hockey as much as we do, that’s probably the best part," Colleen Crowley, one of the veterans on the team, said in an earlier interview with USA Hockey.

While the bulk of the team has also competed at USA Hockey's National Championships in the Women's Senior B division, taking their game outdoors is way more fun. And winning it all makes it that much sweeter.

That's why the women were in no hurry to pack up and make the four-hour ride home. They stayed on the lake taking group pictures and individual shots as they skated around the lake hoisting the trophy, which consists of a silver bowl welded to the top of a small beer keg.

It was a similar feeling of elation for members for the team Huh?, who captured the crown in the Women's Beginner division. For original member Karen Shreve and other members of this squad from Rochester, Minn., it was a great feeling to see their patience, passion and persistence rewarded with the spoils of victory.

"We have this mascot, Pablo who sits in a prominent spot in my house. He's about to be replaced by this pond hockey trophy," said Shreve.

Asked how Pablo feels about being replaced, Shreve said, "He'll get over it." 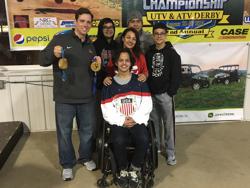 Sled hockey royalty was in the house at the Derby Track on Saturday night as three-time Paralympian Andy Yohe spent several hours posing for photos and mingling with adult players during the annual party.

The Davenport, Iowa native served was the captain of the U.S. Paralympic Sled Team that won gold in Vancouver in 2010 and Sochi, Russia in 2014. He also won a bronze in 2006. Yo he is gunning to become the first U.S. sled player to compete in four Paralympics in Pyeongchang, South Korea.

Yohe paid tribute to U.S. Sled Hockey Team coach Jeff Sauer, by leading the crowd in a toast to his former coach who passed away on Feb. 2.

Yohe also presented a team jersey autographed by the 2015 U.S. Sled Hockey Team to Jonathan Annicks, a teen who was paralyzed after being struck by a bullet outside his Chicago home last April.

Even A Man Down, Special Forces Team Fights To The End

But for one adult team consisting of active duty and retired members of Special Forces units there was one obstacle even they couldn't overcome.

During the first game of the tournament in the 40+ Tier II division, Team Fort Carson lost it's biggest offensive threat, Scott Pyrchalla, who went down with a hamstring injury, leaving the squad a man down.

In keeping with the Army creed of never leaving a man behind, Pyrchalla's teammates carried their injured comrade off the ice and back to the warming tent and then pressed on with the tournament.

Still, the loss proved to be too much for the remaining players to overcome as they finished the preliminary round with one win and two losses, which squashed any chance of advancing to the Saturday's quarterfinals.

"This tournament is tough enough, but once you lose one of your most skilled players it's a hard thing to overcoming me," said Shawn Herlihy, who is stationed at Fort Carson in Colorado Springs.

Other members of the team made the trip from Fort Bragg in North Carolina, while others who have retired from the service came from as far away as Oregon. The team was sponsored by the United Heroes League, an organization committed to ensuring that children of service members have the resources needed to participate in a variety of sports.

While separated by time and distance, this band of brothers share a special bond that translates to the ice.

"It's always a great when we can get together," Herlihy said. "We wish we could play in this tournament every year, but deployments and other commitments make it hard. Still, we share a tight bond. It doesn't matter where we're stationed or how long it's been since we've seen each other, whenever we get together it's just like old times."

Pond hockey players demonstrated their generosity and passion for the game by opening their wallets and bidding on several autographed collectible items that were auctioned off during Saturday night's party at the Derby Track.

Al Deming, president of the Wisconsin Amateur Hockey Association, served as the auctioneer, prompting bidders to show their competitive nature by bidding against each other to score some valuable pieces of hockey memorabilia.

A replica helmet signed by Chicago Blackhawks and U.S. Olympic star Patrick Kane brought in $320, while a jersey signed by the U.S. Sled Hockey Team fetched $330.

Other items, which including a stick signed by the 2014 U.S. Olympic Team and a jersey signed by the U.S. Women's National Team, also brought in big bucks.

In total, $1,340 was raised for the USA Hockey Foundation.