MOS Mixes Fun on the Ice with Work in the Community

Every year, the Michigan Office Solutions (MOS) adult hockey team has been taking part in a charity event to benefit the Grand Rapids Griffins.

Through the Grand Rapids Amateur Hockey Association, the Griffins — based in Grand Rapids, Michigan — give inner city kids the opportunity to play hockey for free.

MOS plays the West Michigan Phantom every year at the Van Andel Arena. For their annual game, MOS helps raise between $3,500 and $5,000.

“That’s a great time,” MOS team member Wayne Vredenburg said. “We get great sponsors — MOS does a great job with that. The Griffins are good to us. A real competitive game.”

2017 marked the 10th year the charity hockey game took place. MOS has had a hockey team for seven years with its biggest event each year being the charity contest.

“It’s good to give back to the community,” said Norm Farr, who has played for the MOS team for all seven years.

Community is important to the guys on MOS. Add into that the chance to play hockey, and it’s a win-win for the guys.

MOS plays its regular weekly hockey at the Patterson Ice Center in the Adult Hockey League. The team plays in the Intermediate Division.

Nine of the 15 players on MOS are original team members. Consistency and loyalty are huge attributes of the guys on the team.

“We’ve been with the same guys for a long time,” said Vredenburg, who isn’t able to play full-time with the team this year, but is filling in when he’s able. “It’s a good group. We’ve got a lot of variety — we’ve got 50-year-olds, we’ve got 20-year-olds. It’s cool; you get a nice gap there. Everyone gets along with everyone. It’s the same guys, so we’re used to everybody.”

It’s important for the MOS players to have the same core guys coming back each season.

“It’s basically like having 10 other brothers to go hang out with,” said Vredenburg, who is 34 years old. “Go BS and have a beer after you play and have a good time. We do more than just play hockey together, we go on trips, hang out.”

Most of the players fall into the 20s to 40s age range. It’s a nice dynamic and the guys have developed plenty of good on-ice chemistry over the years of playing together. Teammates will know the spot a player is going on the ice before a pass is even made.

MOS has had some success over the years as a team, winning two league titles in seven years. But it’s never been and never will be about winning for the guys.

Instead, it’s about, “Just hanging out with friends and have a good time,” Farr said.

Along with weekly league, MOS has made it a tradition to head northwest every year to Eagle River, Wisconsin, for the Labatt Blue/USA Hockey Pond Hockey National Championships. This past year was the third time MOS competed in the annual event. The guys played in the Bronze 21+ Division and won their first two games by a combined 40-6. However, MOS lost its next game and fell in the quarterfinals to end its run.

The players, five of whom are from the original MOS team, love the atmosphere at the pond hockey championships. They also enjoy getting out of town and competing in a tournament that’s completely different from what they are used to.

“This is the most fun I’ve had a tournament in a long time,” said Vredenburg, who competed in his first year. 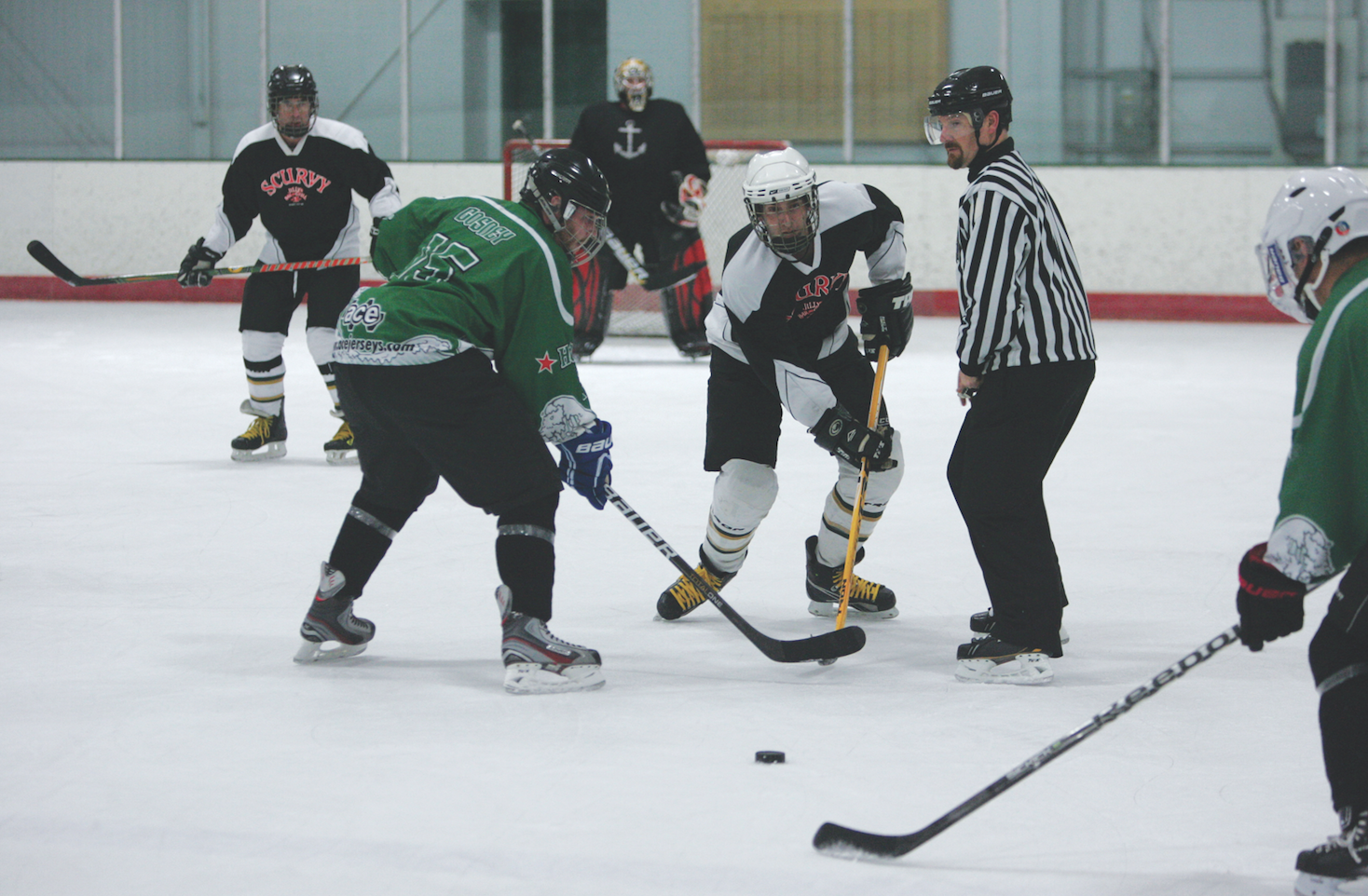 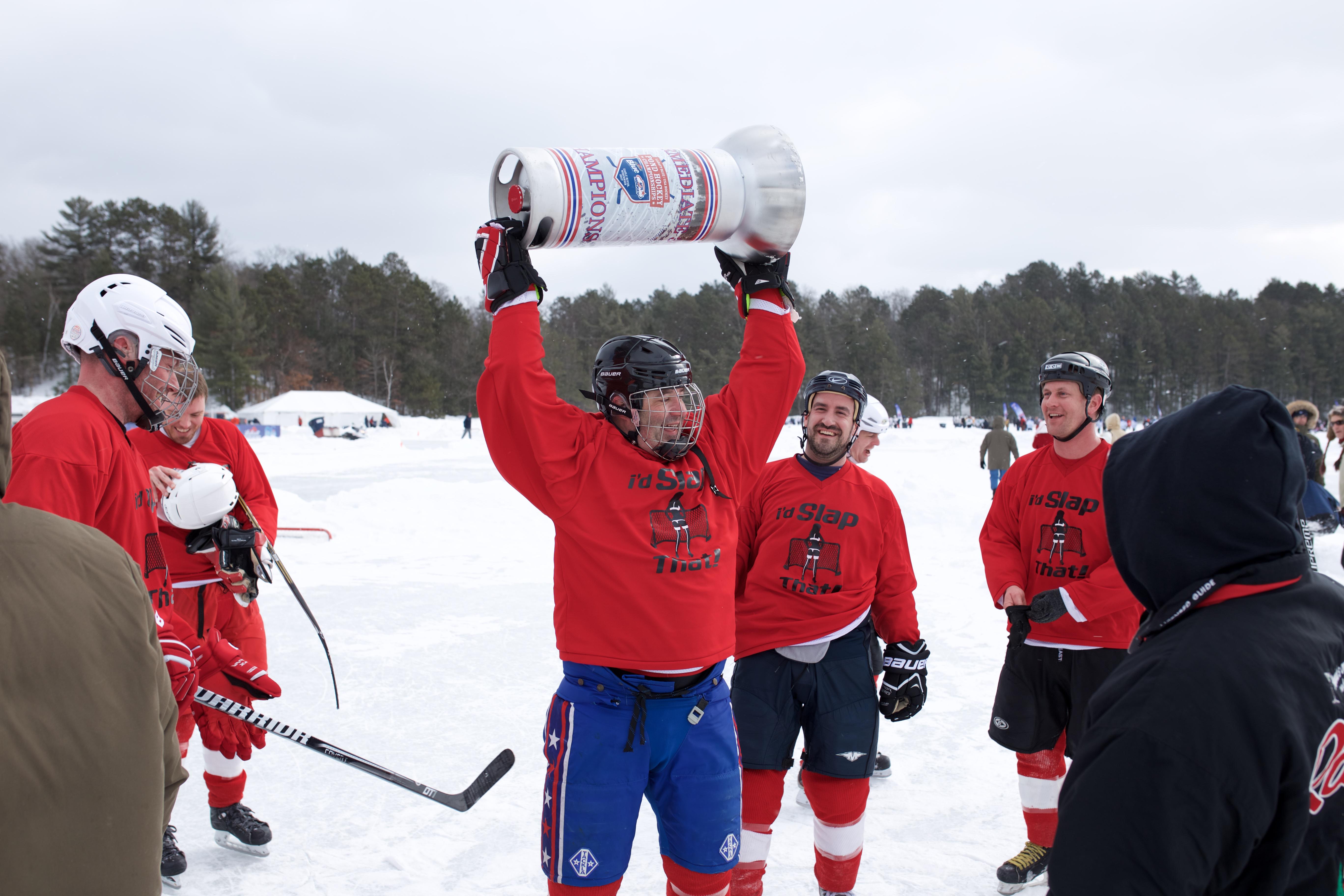